“What type of guitar will I learn to play?”

Most people are inspired to learn to play guitar by hearing a great guitarist. Something inside us makes us say “What is that sound? I wanna play that!”. Once you have experienced this, you are already on the way to being a guitarist.

If you have never played before, there are so many types of guitars and styles of music, it can be tough to know where to start. There are also specific techniques associated with each playing style.

Here is an introduction to the 3 most common styles of guitar playing:

Rhythm guitar is used to accompany a lead instrument (e.g. melody sung by a vocalist). The left hand holds a chord shape (a group of notes) and the right hand strums the strings with a pick. In a band situation the rhythm guitar gives the music drive and momentum. It is the power engine of the band, providing the harmony and locking in with the bass and drums to give a solid foundation underneath the vocals or lead guitar.

A lead guitar usually plays only one or two notes at a time. It can be a melody line or a riff (repeating pattern of notes) or an improvised solo. Most lead guitarists use a pick but others prefer to use the fingers of the right hand to produce the notes.

In a band situation the lead guitarist usually plays the most important riffs and melody lines, plays solos in instrumental sections of songs and also plays call and response with either the vocalist or another instrument such as sax, harmonica or keyboards.

In most styles of fingerpicking guitar, the left hand holds a chord shape and the right hand fingers pick one or two notes at a time with the fingernails. Fingerpicking is often used to accompany a lead instrument or vocalist. In more advanced fingerpicking, both hands are co-ordinated to play bass lines, chords and melodies.

Through the 20th Century, many styles of fingerpicking were developed to a virtuoso level of musicianship. With today’s technology, you can find amazing fingerpickers playing Blues, Ragtime, Celtic Folk, Country, Jazz, Latin and many forms of World music on the internet, particularly on Youtube.

Being able to fingerpick well is an aspiration for many guitarists as it allows them to play entire songs on their own without the accompaniment of additional instruments. 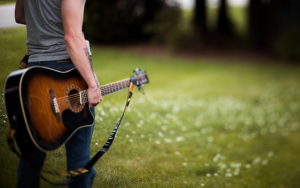 "We truly believe in the importance of music education as a fundamental personal development."